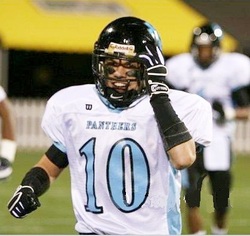 Richard Hammons
By
Steve Blackledge
The Columbus DispatchFriday October 24, 2008 5:47 AM

When quarterback Jake Trubiano broke two long touchdown runs in the first
half last night, it went completely against the nature of a Hilliard Davidson
team that thrives on short plays and long, time-consuming drives.


But Trubiano's runs of 47 and 70 yards put the Wildcats in prime position so
they could grind out a 21-14 victory over Hilliard Darby in an Ohio Capital Conference Central Division game in Crew Stadium.

"What those big runs did was give us some momentum and a little lead to work with so we could run our ball-control offense, let our defense do their thing and hopefully wear them down in the second half," Davidson coach Brian White
said.

Trubiano's first TD run came two plays after an interception of Darby quarterback Brandon Bargar. While zigzagging through the secondary, Trubiano lost his balance and dived over the goal line.

After another Darby turnover, Davidson drove 44 yards in nine plays and scored on a 1-yard plunge by Adam Frazier.

Bargar (123 yards on 13 carries) then connected with Richard Hammons in stride on an 82-yard TD pass and hit Austin Jenkins for a two-point conversion to tie the score at 14.

Three plays later, Trubiano burst through the middle, escaped a tackle and raced 70 yards to score with 2:56 left in the half.

"It was nothing so great that I did. My team sets me up for those runs," Trubiano said. "We called the right plays, my line blocked well for me and I just ran."

Darby failed to convert on three third downs in the second half, and coach John Santagata opted to punt three times on fourth down, the final time with four minutes left. It proved to be a mistake as Davidson ran out the clock.

"In retrospect, you always wonder if you should have gone for it, but at the time we had some timeouts and thought the defense could hold them," Santagata said. "In the end, our turnovers killed us."

Davidson gained a measure of revenge for a 21-10 loss to Darby last season. Although Davidson already had clinched a playoff spot, the win dashed the hopes of Darby (6-4, 3-4).

"We've been counting the days ever since last year," said Trubiano, who had 194 yards on 15 carries. "This is an awesome feeling."
Powered by