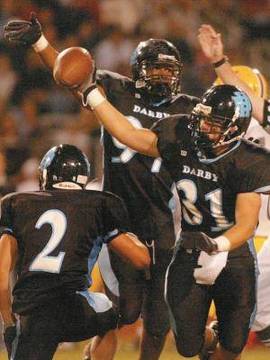 Zach Ison with the loose ball
August 23, 2008
By KEVIN PIERSON, Special To The News

HILLIARD - The Hilliard Darby Panthers didn't finish ranked sixth in the
state of Ohio in Division I football a year ago because they don't have
talent.


The Marietta Tigers got a taste of that talent Friday night as the Panthers
took down the Tigers 53-14 at Hilliard Darby High School.


"We knew what we were getting into up here," said first year Marietta head
coach Andy Schob, noting the Panthers were not only sixth in the state last year
but also had 100 kids out for football and are three times Marietta's size.


As talented and numerous as the Panthers were the Tigers not once backed down, which is a good sign, the Marietta coach said.

"Our kids came out with fire. They played hard. They never quit," Schob said.

Never quitting, the Tigers managed to hold Darby to just 16 points in the second half after allowing 37 in the first two quarters.

Stopping Darby on just a single drive in the first half, the Tigers rebounded by holding the Panther offense in check the second half except for two big plays covering 27 and 34 yards for touchdowns respectively.

Those big plays were an Achilles' heel to the Tigers all night.

On the first play from scrimmage Darby quarterback Brandon Barger faked a hand-off and rambled 65 yards down the field to set up the first of the Panther scores, though it was just a 35-yard field goal by Adam Jenne after the Tiger
defense held Darby on three consecutive plays from their own 10.

Trailing 3-0, the Tiger offense went three-and-out. Darby never looked back as they covered 61 yards on five plays for the first of their touchdowns on the ensuing possession, capped Barger's 22-yard pass to Richard Hammons.

Barger scored from five yards out on the next possession to give Darby a 16-0 lead at the end of the first quarter.

Marietta got on the scoreboard as time ran down in the second quarter with senior quarterback Cody Westbrook connecting with receiver Sean Munfield on a 10-yard scoring strike at the 2:20 mark.

At the half the Tigers ha d yielded 399 yards to the Panther offense with 254 coming on the ground and 145 through the air. Of those 399 yards 266 of them were the result of Barger's arms and legs.

Conversely the Tigers managed just 134 in the first half.

The second half was a slightly different story as Schob's halftime adjustments forced Darby to punt on their first possession of the third quarter after Marietta turned the ball over on downs.

Dropping back into punt formation, Darby punter Brad Stimson had the snap sail over his head, giving the Tigers the ball at the Panther 3-yard line.

Three plays later Westbrook punched it in for the second Marietta score.

In the fourth quarter Darby put up two more touchdowns on long runs, one by Barger and one by backup quarterback Matt Allen. The Panthers were also given a safety when Munfield intentionally stepped out of the back of the end zone on a punt attempt.

Despite the loss, Schob believes his team will emerge as a contender in the Southeastern Ohio Athletic League as young players get some experience and veterans return from being injured.