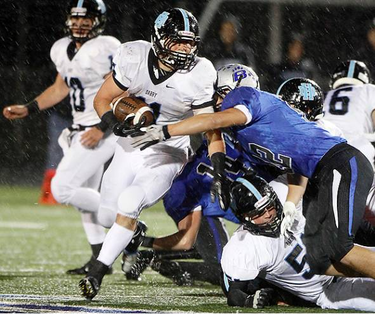 Hayden VanKirk rushed for 152 yards and two touchdowns on 20 carries to lead a run-minded Hilliard Darby High School football team to a 42-0 win over host Hilliard Bradley on Oct. 26 for the Panthers’ first undefeated regular season.

Darby is 10-0 overall and won the OCC-Cardinal Division at 7-0.
In 2007, the Panthers finished 9-1 after losing to Groveport 34-17 in the 10th week. They earned a bit of revenge by defeating the Cruisers 16-3 two weeks later in a Division I, Region 3 semifinal.

“It’s great to be 10-0,” said VanKirk, who had 114 yards and one touchdown on 10 carries in the first half.
“It’s great to be able to get this with my brothers. It’s really important to us.”

“It’s important to never be one-dimensional,” said Darby coach John Santagata, whose team has clinched the No. 1 seed in the Region 3 computer ratings. “Our kids know what they have to do when we call their number.”

Van Kirk added a 3-yard touchdown run on the first drive of the second half as the Panthers totaled 384 yards, all on the ground.

“It definitely plays to our advantage because we want to run the ball,” VanKirk said of playing in a steady rain. “Our offensive line was playing great and opening up holes for everyone who was running behind them.”

Bradley, which finished 4-6 overall and 1-6 in the OCC-Cardinal, totaled 205 yards, all rushing. Reilly Butz led the way with 70 yards on eight carries and Eric Bridgett had 66 yards on five attempts.

With 5 minutes, 51 seconds left in the third quarter, Bradley junior quarterback Tommy Horn was injured on a
7-yard run for a first down at the Jaguars’ 32. After a 20-minute delay, he was carted off the field with an apparent head injury.
Powered by