Darby holds on for a wild victory 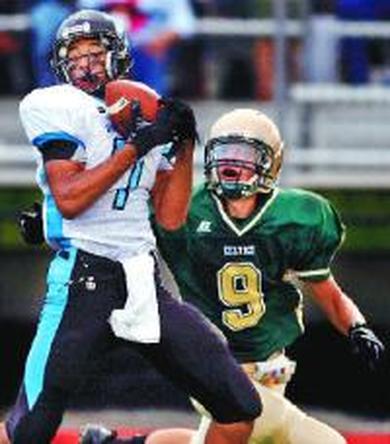 Hilliard Darby football did not exit the premises in June when its three best players, Jeremy Ebert, B.J. Machen and Jordan Richeson, walked off the stage after getting their diplomas.

The program also hasn't skipped a beat since coach Paul Jenne pulled a shocker and announced his retirement after leading the team to a Division I regional final.

Behind Brandon Bargar, who had to wait for Ebert to graduate to become quarterback, Darby defeated visiting Dublin Jerome 42-28 last night in a nonconference game.

The game was delayed 1 hour, 13 minutes at halftime after Jerome
administrators and game officials became concerned over lightning strikes that were not in the vicinity but were numerous.

Bargar, a senior, was electrifying with touchdown runs of 4, 33, 1 and 7 yards and a 9-yard touchdown pass. He set up a touchdown with a 60-yard run.

"We use that as motivation," Bargar said of maintaining the team's prominence despite losing great players. "We worked hard in the offseason. Watching Jeremy for two years definitely helped me."

There were four lead changes as the teams were unstoppable on offense.

The game finally turned in Darby's favor when Bargar ran 60 yards on an option to the 1. That set up his 1-yard run that made it 35-28 on the first play of the fourth quarter.

The Panthers (2-0) got an insurance touchdown when Bargar ran 7 yards with 1:30 left.

Coach John Santagata said the players were able to overcome the delay because they have been taught to put out a consistent effort.

"It's tough to be sitting there, but they've put in a lot of time all week in practice," he said. "We said they had to get after it. When we talk to the kids, we tell them it's important to execute and develop a tempo."

And what about overcoming the loss of Ebert, Machen and Richeson?

"It's important for a team to create its own identity," Santagata said.

Jerome (1-1) looked as if it would match Darby's every move. The Celtics made it 28-28 with 1:33 left in the third quarter when backup quarterback Ryan Gannon found Cameron Wilson on a 53-yard reception.

After Wilson split the defensive backs at midfield, there was no catching him.

The first half was strange in that each team took turns dominating.

But Darby was too much for the Celtics. Bargar got help from running backs Iko Bako and Matt Cyrus. Receiver Tyler McIntosh caught a 9-yard touchdown pass and set up a touchdown with a 46-yard reception.

The offensive line wasn't too bad, either.

"We have a line that's just big and solid," left guard Nazar Soroka said. "We really got after it tonight. When we lost those players from last year, we just knew we had to reload. We didn't just lose players. We lost coaches, too. We had
something to prove."
Powered by