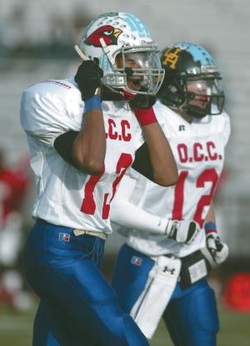 It didn't take long for Brandon Bargar to make his presence felt in the
Central Ohio All-Star Game last Saturday at Upper Arlington.

On his first play from scrimmage, the former Hilliard Darby High School
quarterback lined up at wide receiver and took a lateral from Pickerington
Central quarterback Nick Raymond. After eluding a defender, Bargar spotted
Pickerington North tight end Alex Bayer, who had gotten behind the Central
defense and had a clear path to the end zone.

"Once I finally saw him, I was like, 'This is a touchdown,'" Bargar said.

Bargar took a hit as he released the ball, but looked up to see Bayer on his way to the end zone for an 80-yard touchdown.

"When you see the guy running down the field, it's a lot easier to get up," Bargar said.

The touchdown gave the OCC a 7-0 lead in the first quarter and set the tone for the game, as the OCC dominated the Central team for the rest of contest.

Bargar was named the OCC's offensive Most Valuable Player after throwing for 135 yards and two touchdowns in the OCC's 31-6 victory.

"It's definitely something I'll never forget," he said.

"Winning the MVP is just icing on the cake."

Bargar mostly was used at quarterback, where he split snaps with Raymond. But the coaching staff for the OCC -- from Thomas Worthington -- took advantage of his athleticism by occasionally lining him up at receiver when he wasn't behind
center.

Bargar caught one pass for six yards and rushed for 12 yards on two carries.

Also representing Darby was wide receiver Tyler McIntosh, who had one reception for eight yards, but left the game in the fourth quarter with an injury. He left the stadium wearing a sling around his right arm, and trainers suspected he had a broken collarbone.

McIntosh's injury was a reminder of the risks associated with playing in an exhibition all-star game. Despite the potential for injury, college-bound players view the game as an opportunity to refresh their skills before heading to the next level.

"I definitely got used to hitting again," said Bargar, who will play for Otterbein. "When you get into a live game and the lights are on, people are flying at you, and it just helps a lot."

More than anything else, the players said the best part of the game was meeting other top athletes from central Ohio, and having one more chance to finish their high school careers.

"It's been really fun," Bargar said. "That's the perfect word to use: fun."

No Davidson players participated in the game.
Powered by