Lineman grows into role as a double-team magnet 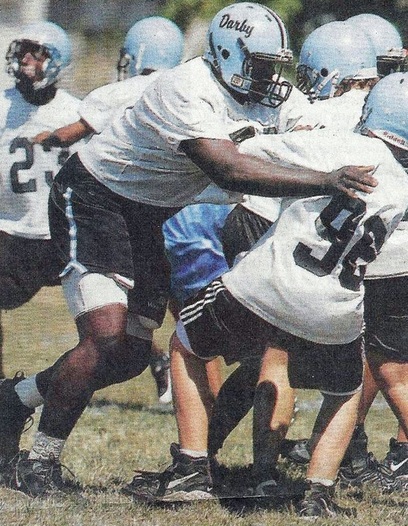 Antonio Jeremiah hollered for Hilliard Darby coach Paul Jenne to come into the locker room on the double recently during a break in two-a-day practices.

“Coach, coach, I’m down to 299,” Jeremiah said in a booming voice as teammates looked amused while eating lunch.

This is the same player whose sandwich that day was a half loaf of Italian bread with six slices of ham and an equal number of slices of cheese.

Then it was Jenne’s turn to raise his voice.

Jeremiah was in anguish. Jenne was laughing. He had a confession to make.

“Oh, I stepped on the back of the scale and Antonio didn’t know it,”Jenne said.

It probably won’t matter what Jeremiah weighs this season. The senior defensive tackle, who is 6 feet 6 and wears size-18 cleats, could be such a force that he might have to deal with two and even three blockers. That’s what happened in 2005, when he played out of position at defensive end.

What has attracted colleges such as Ohio State is that Jeremiah is a big man, not a fat man. His legs are trunks, his
stomach is firm and he has run an electronically timed 5.03-second 40-yard dash, which is swift for a down lineman.

“It’s not just size with Antonio,” Jenne said. “What gets him past the look test is that he can really move. One blocker
can’t handle him. The great thing is that he just wants to play football. He’s not thinking about the colleges.”

Or as Jeremiah says, “My phone is off right now.”

The only knock is that Jeremiah’s motor hasn’t revved on every play because of frustrated over double- and triple-teams.

“People will chop block me and the refs won’t see, or one guy will hit me high and another low,” Jeremiah said. “I used
to get mad at that. I’ve learned that’s going to happen because I’m the biggest guy on the field. I must forget about all that and just put pressure on the ball. I have to realize that I can still fly around and get to the ball carrier.”

“Antonio can throw away offensive linemen like they are toddlers,” he said. “It almost seems kind of unfair. I’ve gone against Antonio since freshman year. It has been up and down for me.”

Two-way Darby lineman Michael Fritz smiled and said, “I kind of feel bad for the centers. If they don’t get low on Antonio, it’s all over. He can take up an entire hole. When he gets angry, he can knock a lot of people down.”

“And he’s just starting to get serious about the weights,” Carter said.

The best might be yet to come for Jeremiah. He never played football until his family moved from Massachusetts to Hilliard before he entered eighth grade.

“Each year, I think I get better and better,” said Jeremiah, who finished sixth in the state wrestling tournament as
a 258-pound heavyweight. “I’m learning that I can never let my team down. I have to play hard on every down. I have to play so hard that they’ll have to carry me off the field.”
Powered by