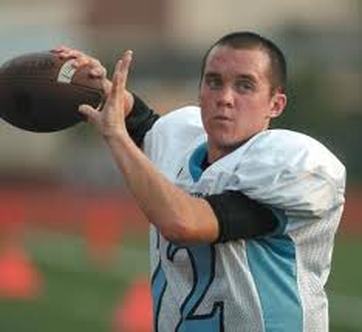 Ebert last year led the Panthers to an 11-2 record, their first OCC-Ohio
Division title and their first Division I playoff appearance. Bargar barely was
recognized within his own school.

Despite being an injury away from becoming the starting quarterback, Bargar's last name was spelled "Barger" in most programs, and it still was spelled that way on the rosters handed out for last Friday's game at Dublin Jerome.

The senior wasn't known for his football skills by many of Darby's students or teachers, either. Two days before the opener against visiting Marietta on Aug. 22, a teacher asked coach John Santagata what position Bargar plays and was surprised to hear that he is the starting quarterback.

But after Darby won its first two games, Bargar finally is making a name for himself.


"I know the only way I'm going to make a name for myself is to win," Bargar said. "It's weird because I've already noticed a difference. ... But I'm not going to let any of that go to my head because when you think you've reached the top, that's when you fall."

Left guard Nazar Soroka, a third-year starter, said Bargar has many of the same attributes that made Ebert a standout.

"Of course, it's difficult to fill Ebert's shoes, but Brandon reminds me of Jeremy in so many ways," Soroka said.

"He's a great leader and role model on the field. He knows when it's time to have fun and when it's time to be serious. He's similar to Jeremy when it comes to his running and how well he carries out play-fakes. Now, you're seeing him
put his shoulder into people when they're going to hit him. And he's throwing the ball with a lot more confidence. He's willing to stand in there and take a hit to complete a pass."

Bargar said Ebert taught him how to read defenses, which is essential in Darby's pistol offense.

"Nobody likes sitting on the bench for an entire season, but it was a blessing in disguise because I learned a lot from watching how Jeremy ran our offense," Bargar said. "He was always good to me and he taught me how to read
the end to decide if I need to give the ball to the running back or pull it. I'm grateful that he took the time to teach me, because he didn't have to do that."

Darby was expected by many to struggle after losing Ebert (Northwestern) and linebacker B.J. Machen (Georgia Tech) along with coach Paul Jenne, who resigned June 17.

Those doubts helped inspire the Panthers to train harder, Bargar said. He has added 20 pounds and now is 5-foot-11, 155 pounds.

Bargar also runs sprints for the track and field team and has been timed at 4.45 seconds over 40 yards.

"People were predicting we'd finish anywhere from 2-8 to 5-5, and as the quarterback I definitely took it personally," Bargar said.

"I knew I needed to get faster and stronger, because I'm going to handle the ball a lot more this year. The extra muscle and speed definitely have helped because I'm taking a lot more hits."

Bargar also is quick to deflect a lot of the praise he is receiving toward his teammates.

"I don't deserve all the credit for what my team has done or even for what I've done, because I couldn't do anything without my teammates' support," he said.

"I just want to help my team win. I've been waiting three years for this opportunity and I'm not going to let it slip out of my hands."
Powered by