Narrow losses too much for Darby to overcome 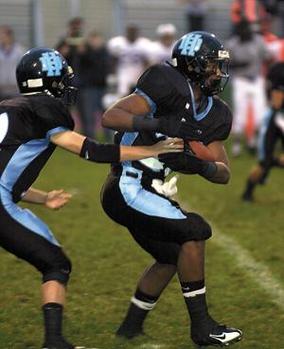 The Hilliard Darby High School football team recovered from the losses of 16 starters and former coach Paul Jenne -- who resigned June 17 for personal reasons -- to finish 6-4 for its third winning season in its 13 years.

But those four losses were by 10 or fewer points each, leaving some to wonder about what might have been.

"A lot of people were predicting us to finish 2-8 or 3-7, so it's a positive that we had a winning season to prove them wrong," senior quarterback Brandon Bargar said. "But honestly, this is very frustrating because we feel like we're good enough to be a playoff team. We never really got outplayed, but we made too many mistakes to beat the teams that we lost to."


The Panthers beat only one team that finished with a winning record, defeating Dublin Jerome 42-28 on Aug. 29. Darby rallied from deficits of 7-0 and 21-20 to defeat the Celtics, who went 6-4 and qualified to the Division II, Region 7 playoffs. In that game, Bargar rushed for 170 yards and four touchdowns and completed five of 10 passes for 87 yards and a score.

Darby turned the ball over five times against UA, and two turnovers set up touchdowns against Davidson.

Against Coffman, Darby had a potential tying touchdown overturned with less than two minutes left. The official closest to the ball signaled a touchdown on a 21-yard pass from Bargar to senior slot receiver Richard Hammons before another official ruled that Hammons didn't hold onto the ball long enough to have possession.

"We made too many turnovers to beat teams the caliber of Upper Arlington or Davidson," Bargar said. "On film, it looks like Hammons had possession of the ball long enough for it to be a touchdown, so that one was a heartbreaker."

"When you look at the tradition of the programs and their coaching staffs, we knew our division of the OCC was going to be the toughest around," coach John Santagata said. "The four teams that beat us were all great teams, but it didn't
help that we had 12 turnovers in those games."

Bargar was 87-for-141 passing for 1,330 yards and 10 touchdowns and rushed for 893 yards and 17 touchdowns on 116 carries.He shared OCC-Central Player of the Year with Kilbourne quarterback Aaron Kingcade and UA running back Tommy
Farwick.

Cyrus rushed for 532 yards and four touchdowns on 88 carries, and Ewald had seven catches for 130 yards and one touchdown.

Junior punter Brad Stimson and junior kicker Adam Jenne are expected back as well. Stimson was second-team all-league and Jenne made all three field-goal attempts and was 26-for-31 on extra-point attempts.

"Our seniors worked hard in the offseason and they were a big part of the success that we had," Santagata said. "We're losing a lot of starters and a lot of our junior varsity kids are going to go to Bradley, so we're not going to have the kind of depth that we've been used to. We're going to be starting from scratch again."